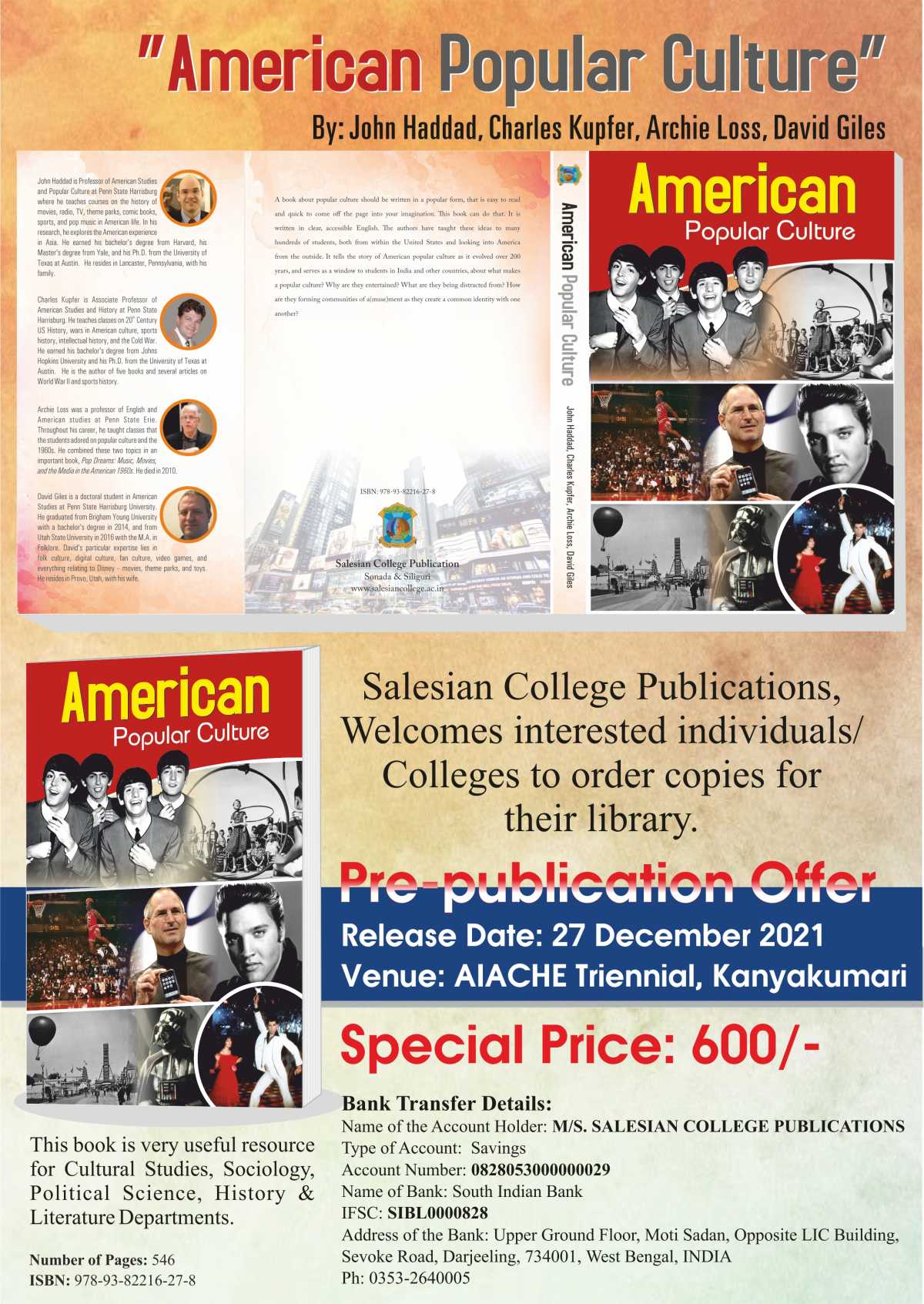 The book entitled “American Popular Culture” published by Salesian College Sonada/Siliguri is available on-demand both in India and USA.

“Written in clear and simple English, the ebook will be made available to students in both AIACHE and Asia Network,” says AIACHE president Salesian Father George Thadathil.

Father Thadathil adds, “A limited run of hard copies will be printed after getting confirmation of the pre-publication orders and will be made available to the principals of colleges in India and America desirous of the same.”

The lead author John Haddad, chair of American Studies at the well-known Penn State University in eastern USA, and Glenn Shive former United Board Vice President, Hong Kong, the initiator of the project, were present at the virtual launch from Scotland.

The book is considered as a preparatory text for three reasons: first, for those who have aspirations or connections with the US to know how the US society emerged and grew over two centuries and more – as a preparation to embrace it, or, to acknowledge the already existing connections.

Second, for those who entered the world in the new millennium and are the Z Gen beginning their journey where the book almost ends, except for the last chapter – it’s an entry into the past of a nation which ruled the global scene for a century. This helps them understand the global transition they will witness in their life time. It will help them understand their elders who witnessed a parallel world in dominance – the European civilization and culture which remained as the focal attention of a generation and more for 100 years before them.

Third, the book has a more direct and explicit objective to achieve in as much as it is the culmination of a culture studies project written by American Authors for Asian students and published in India for the global consumption.

“This effort is indicative of the transition global culture is undergoing,” Father Thadathil remarked.

Thadathil also pointed out that the book was “an assessment of the travails through which the neglected, ostracized, dominated black population went through to achieve semblance of an egalitarian status – including for the Asian model minority in the US – the book is a throwback to the cultural transitions that Indian democracy needs to achieve to be truly Indian and global.”

The American Popular Culture begins with the early 1800s and ends with the early 21st century – a span of two centuries: 19th and 20th, tracking a decade to decade progress in its narration. The impact popular culture makes in shaping a generation and paves the way for the next is captured with measured clarity.

Advisor to the Asia Network lenn Shive has conceived of a web-based platform to enable Indian and American students to communicate with one another online using John Haddad’s book as a jumping off point for discussions about popular culture in America and in India.

Todd Goetz from Washington-Lee University in Virginia, will lead the design of the web platform linking Indian and American students in AIACHE and Asia Network.

“Eudaimonia”, the Greek word for the perfected life. It refers to an ideal life in an idyllic state of wellbeing – irrespective of the location you are in being scenic or not
Read More 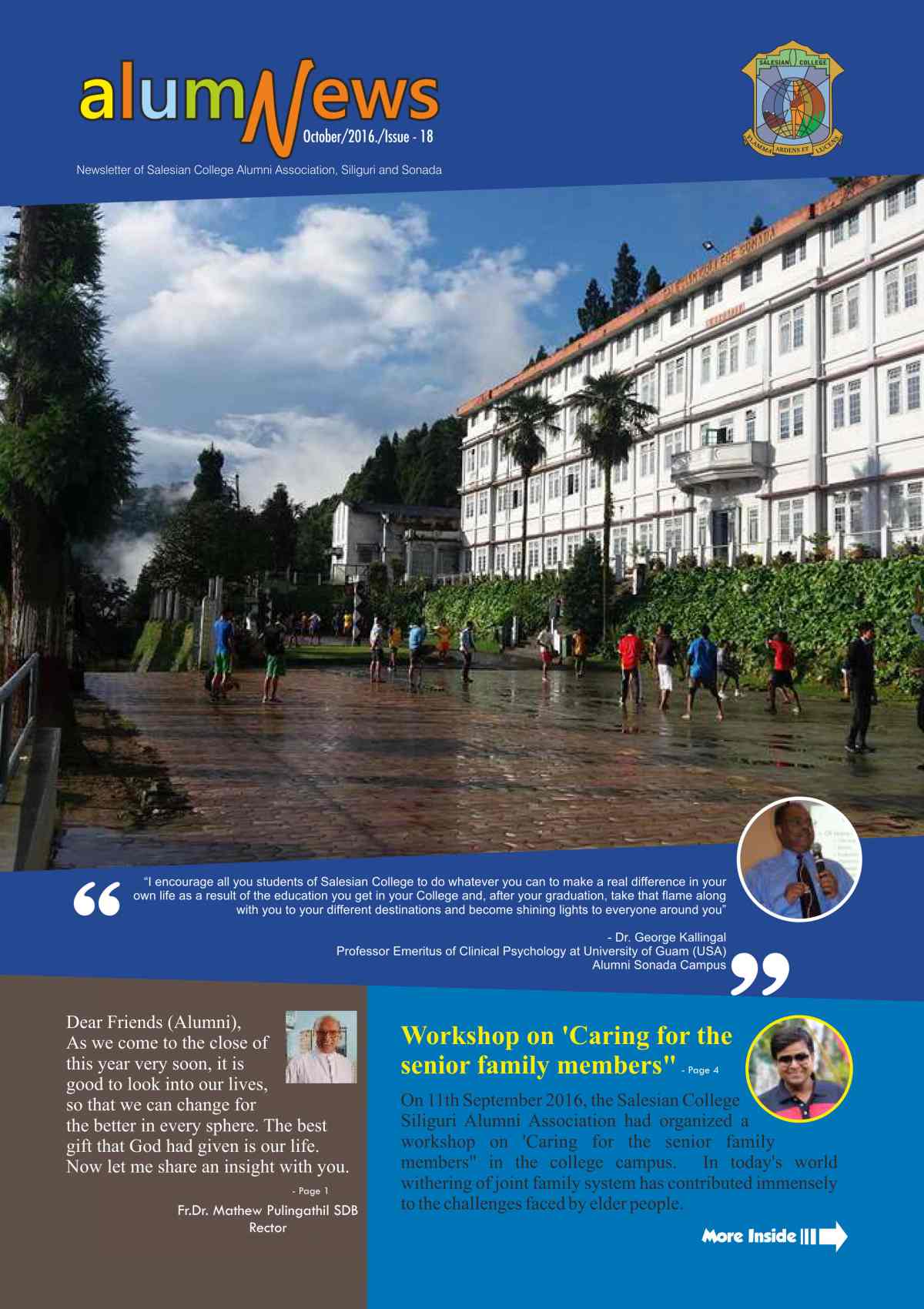 One more Season of Celebrations have passed us by. We mark the year through celebrations and by counting the occasions for the celebration we have provided to others. 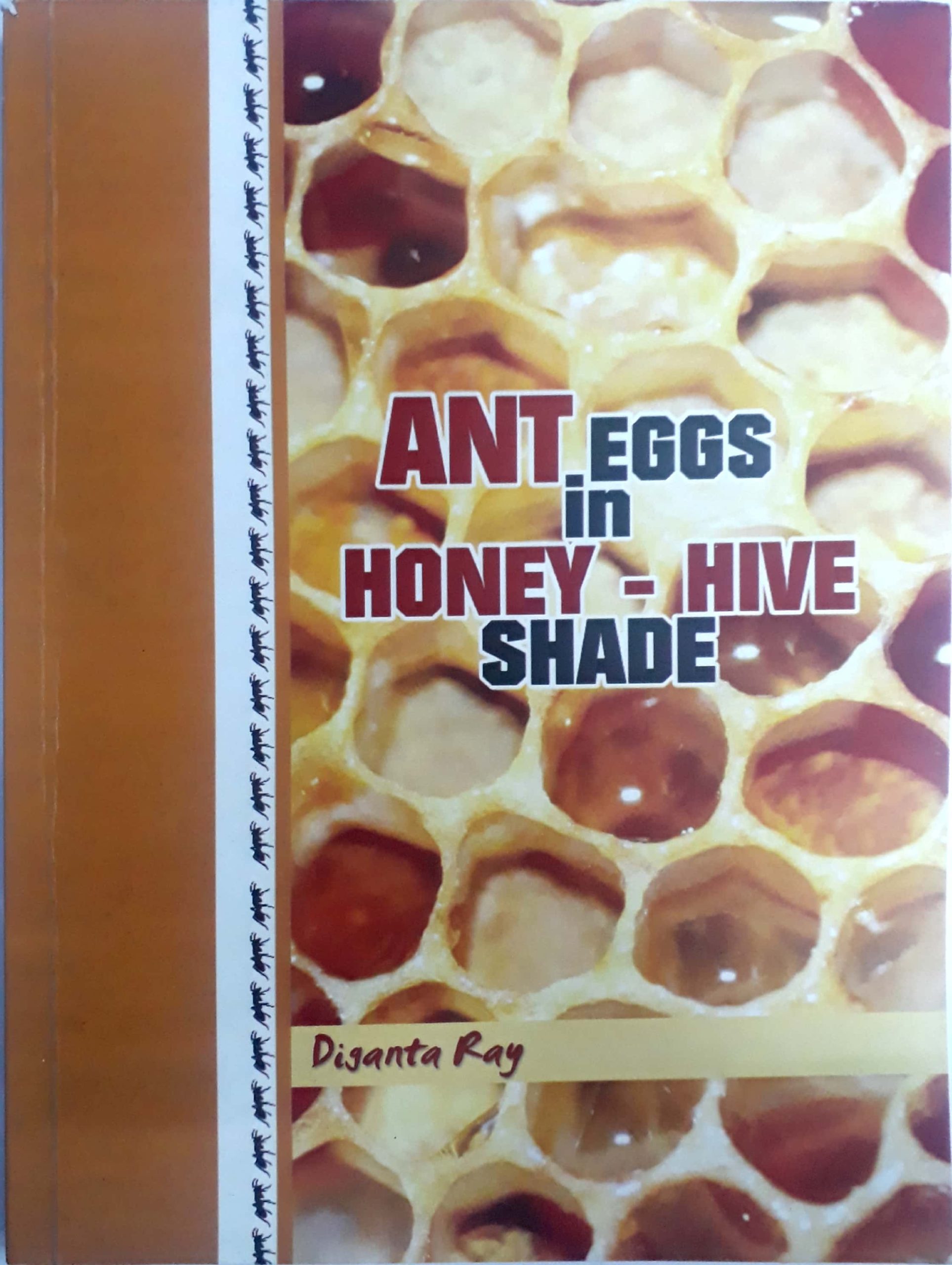 Ant Eggs in Honey-Hive Shade is another collection of poems from Diganta Ray. It is the outcome of the churning that life produces in one’s veins, heart and emotional field. 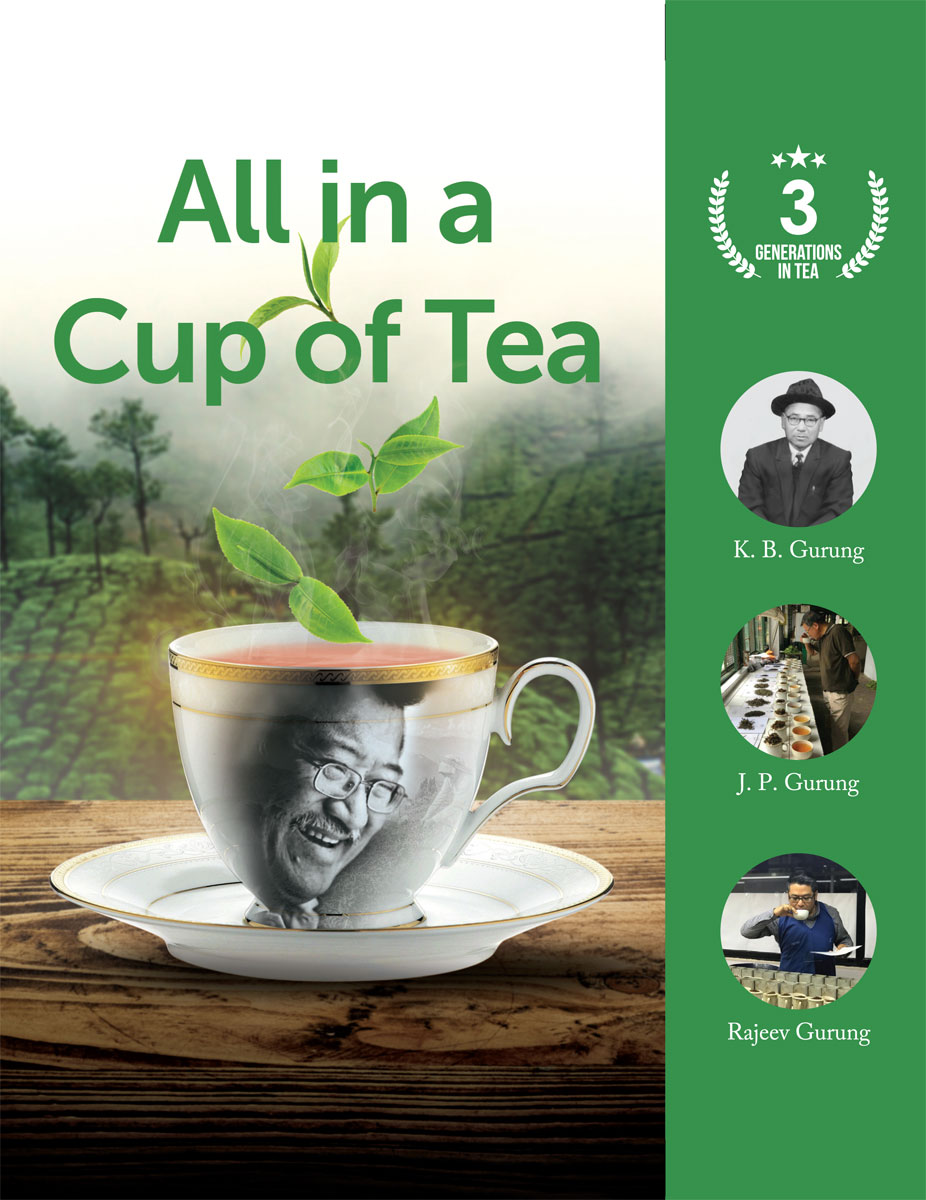 All in a Cup of Tea

It was a bright and sunny autumn morning in the year 1905. A festive mood was in the air as it was the day of Tika which is the tenth day after the Navratri Puja celebrations.
Read More 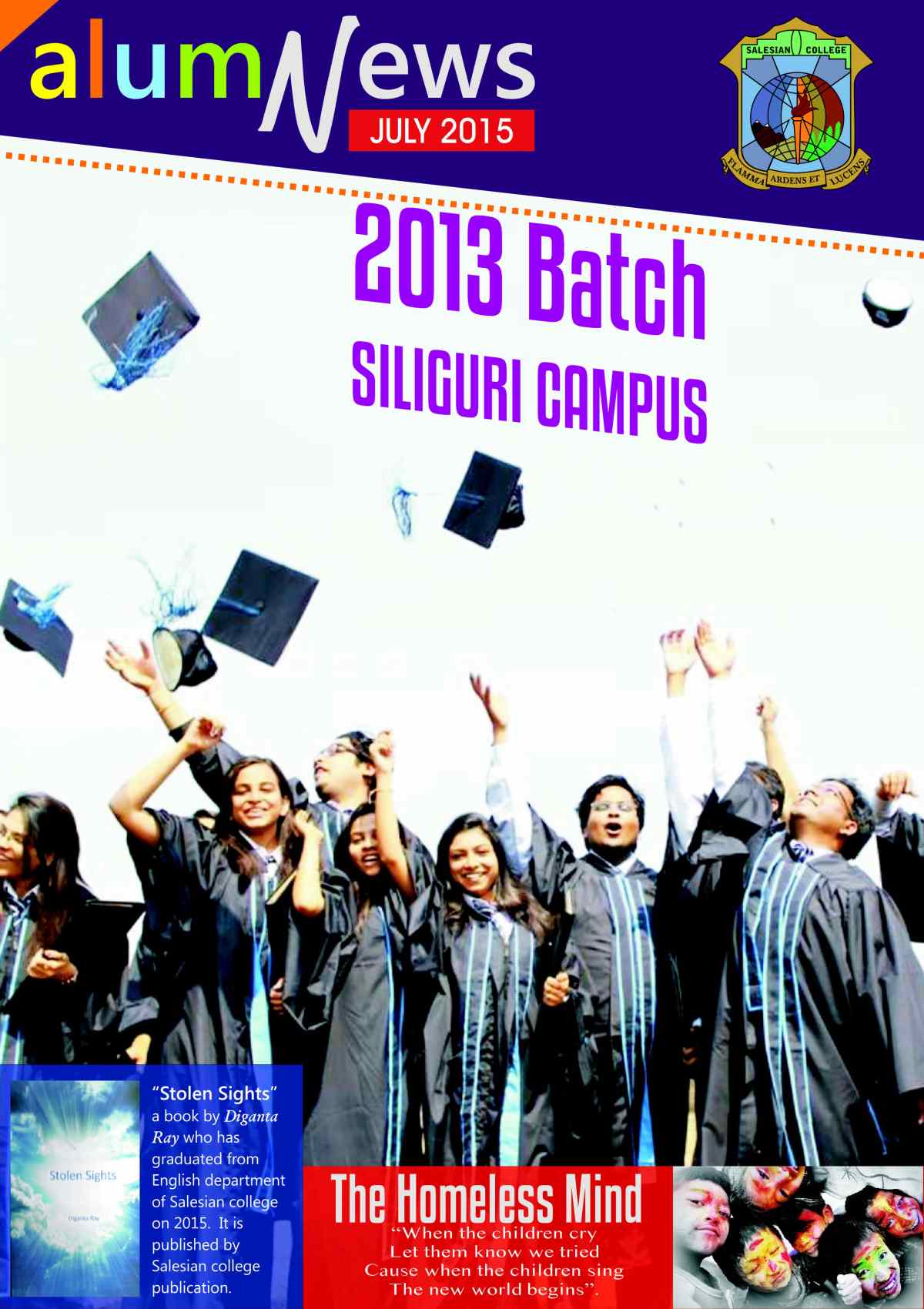 In times past, cities were built on mountain tops for safety reasons and they were visible from afar. “A city set on a hill cannot be hidden” (Mt. 5.14); so did the Lord Jesus teach his disciples

Salesian College, Sonada was accredited by NAAC on 16 September 2004 and was given the Grade C++ (Institutional Score between 65-70%). On 26 February 2010 Salesian College has been conferred the status of a College with Potential for Excellence (CPE) by UGC, New Delhi, and into its 2nd Cycle from 1st April 2014. In March 2012, the College was re-accredited by NAAC with ‘A’ Grade (CGPA of 3.16 out of 4) to be the first College to receive such grade under the University of North Bengal.

The College retained its A Grade under the New stringent Format of Accreditation in May 2019 and it is valid till 2024.

Salesian Publications, Salesian Research Institute, and Salesian Translation Centre offer opportunities for capacity building for aspiring teaching and research personnel of the region. Salesian College Extension Activities Centre has trained and placed over 600 youth of the region in collaboration with the Ministry of Rural Development and Don Bosco Tech, New Delhi. Salesian College invites young people and their parents to partner in nurturing an ideal society.